September 29, 2022
Click for PDF
U.S. anti-corruption enforcement has continued apace through the first eight months of 2022.  Although some will point to declining numbers of Foreign Corrupt Practices Act (“FCPA”) enforcement actions in 2022 to date, particularly against corporations, as compared to the heights of recent years, our view from the trenches is that enforcement is evolving, not fading.  As evidenced by the bevvy of activity catalogued in the pages that follow, our experience is prosecutors at the U.S. Department of Justice (“DOJ”) and enforcers at the U.S. Securities and Exchange Commission (“SEC”) remain acutely focused on international anti-corruption enforcement and that the compliance challenges faced by global corporations are as complicated today as they have ever been.  In addition, the expanded employment of money laundering charges has broadened prosecutors’ reach.
This client update provides an overview of the FCPA and other domestic and international anti-corruption enforcement, litigation, and policy developments from the first eight months of 2022.  In January 2023, we will publish our comprehensive year-end update on 2022 FCPA developments.
FCPA OVERVIEW
The FCPA’s anti-bribery provisions make it illegal to corruptly offer or provide money or anything else of value to officials of foreign governments, foreign political parties, or public international organizations with the intent to obtain or retain business.  These provisions apply to “issuers,” “domestic concerns,” and those acting on behalf of issuers and domestic concerns, as well as to “any person” who acts while in the territory of the United States.  The term “issuer” covers any business entity that is registered under 15 U.S.C. § 78l or that is required to file reports under 15 U.S.C. § 78o(d).  In this context, foreign issuers whose American Depositary Receipts (“ADRs”) or American Depositary Shares (“ADSs”) are listed on a U.S. exchange are “issuers” for purposes of the FCPA.  The term “domestic concern” is even broader and includes any U.S. citizen, national, or resident, as well as any business entity that is organized under the laws of a U.S. state or that has its principal place of business in the United States.
In addition to the anti-bribery provisions, the FCPA also has “accounting provisions” that apply to issuers and those acting on their behalf.  First, there is the books-and-records provision, which requires issuers to make and keep accurate books, records, and accounts that, in reasonable detail, accurately and fairly reflect the issuer’s transactions and disposition of assets.  Second, the FCPA’s internal accounting controls provision requires that issuers devise and maintain reasonable internal accounting controls aimed at preventing and detecting FCPA violations.  Prosecutors and regulators frequently invoke these latter two sections when they cannot establish the elements for an anti-bribery prosecution or as a mechanism for compromise in settlement negotiations.  Because there is no requirement that a false record or deficient control be linked to an improper payment, even a payment that does not constitute a violation of the anti-bribery provisions can lead to prosecution under the accounting provisions if inaccurately recorded or attributable to an internal accounting controls deficiency.
International corruption also may implicate other U.S. criminal laws.  Frequently, prosecutors from DOJ’s FCPA Unit charge non-FCPA crimes such as money laundering, mail and wire fraud, Travel Act violations, tax violations, and even false statements, in addition to or instead of FCPA charges.  Without question, the most prevalent amongst these “FCPA-related” charges is money laundering—a generic term used as shorthand for statutory provisions that generally criminalize conducting or attempting to conduct a transaction involving proceeds of “specified unlawful activity” or transferring funds to or from the United States, in either case to promote the carrying on of specified unlawful activity, to conceal or disguise the nature, location, source, ownership or control of the proceeds, or to avoid a transaction reporting requirement.  “Specified unlawful activity” includes over 200 enumerated U.S. crimes and certain foreign crimes, including the FCPA, fraud, and corruption offenses under the laws of foreign nations.  Although this has not always been the case, in recent history, DOJ has frequently deployed the money laundering statutes to charge “foreign officials” who are not themselves subject to the FCPA.  It is not unusual for DOJ to charge the alleged provider of a corrupt payment under the FCPA and the alleged recipient with money laundering violations.
FCPA AND FCPA-RELATED ENFORCEMENT STATISTICS
The below table and graph detail the number of FCPA enforcement actions initiated by DOJ and the SEC, the statute’s dual enforcers, during the past 10 years. 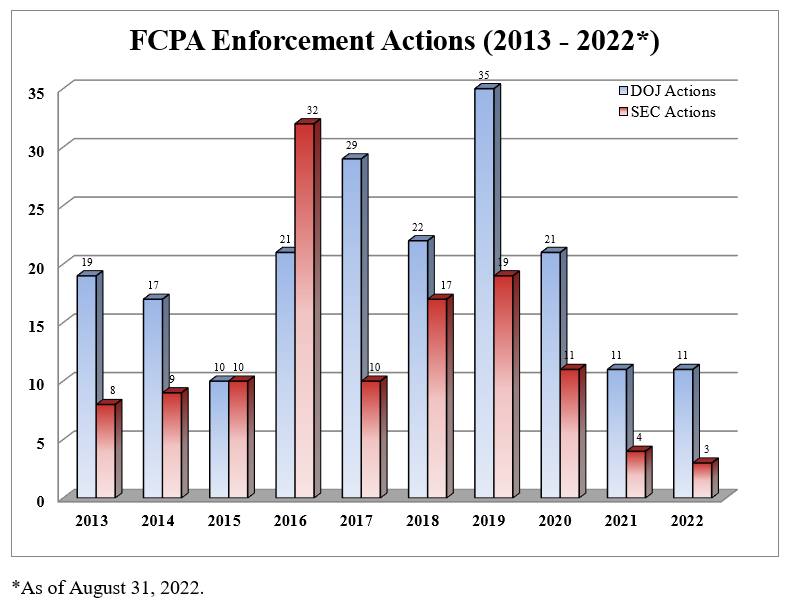 But as our readers know, the number of FCPA enforcement actions represents only a piece of the robust pipeline of international anti-corruption enforcement efforts by DOJ.  Indeed, the increasing proportion of “FCPA-related” charges in the overall enforcement docket of FCPA prosecutors is a trend we have been remarking upon for years.  In total, DOJ brought 11 such FCPA-related actions in the first eight months of 2022, bringing the overall count to 22 cases that DOJ’s FCPA unit filed, unsealed, or otherwise joined since the beginning of the year.  The past 10 years of FCPA plus FCPA-related enforcement activity is illustrated in the following table and graph. 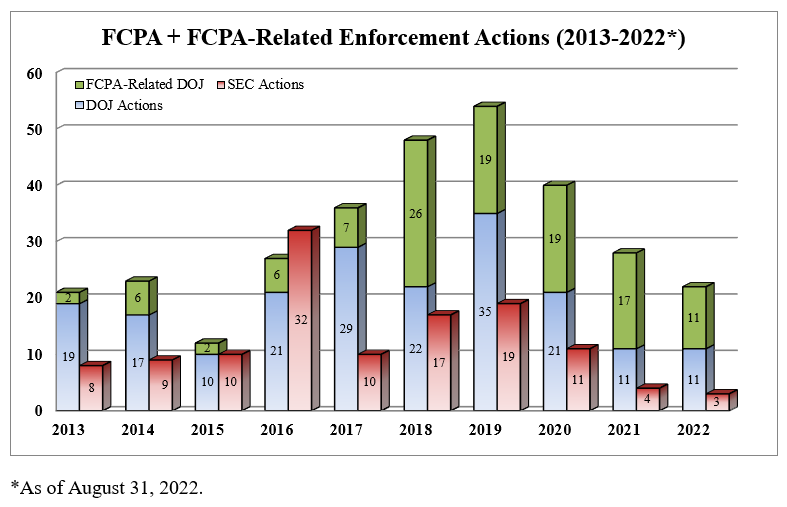